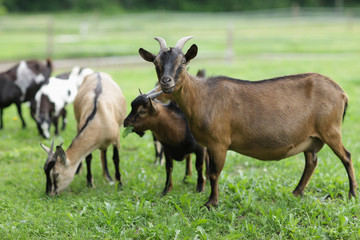 Are you thinking of starting your very own farm and raising dairy goats? Good for you! Not only is it a great a source of income and joy, living with farm animals is good for your health, too.

However, you can’t go in blind. Make sure that you know everything there is to know about how to raise goats for milk before starting out. From feeding to breeding, you’ll need to be an expert!

But don’t stress. We’re here to help. Keep reading to learn everything you need to know in this handy guide to raising and milking goats.

Let’s Start with the Basics

Educating yourself about raising goats can seem overwhelming. So, let’s start with the basics to keep it simple.

In order for a goat to produce milk, it must be a female goat that has produced offspring. (So, you won’t be getting any milk if your goat farm consists of only ladies!) Milk production in goats is known as “freshening” and occurs after each time a goat has babies, just like humans.

Most commonly, goats have their doelings and bucklings in the spring. After they give birth, they can produce milk for up to a year. This production will slowly decrease as the year goes on.

Does and wethers are generally mild-tempered and sweet and will not attempt to butt you. You will see aggression most commonly in bucks.

How to Choose Your Breed

Now that you know the basics, let’s get into the nitty-gritty of raising goats and how to make it work for you.

In order to raise dairy goats, you’ll first need to decide which breed or breeds you would like to own. Because your product goal is milk, you should look for one of the following breeds:

Each of these breeds produces a different-tasting sort of milk. If you’re looking for a breed that produces milk that tastes most similar to cow’s milk, go with the Nigerian Dwarf. Plus, they’re tiny and cute!

Want to learn even more about goat breeds? Click here.

How to Purchase Goats

So, you’ve decided on a breed or breeds and you’re ready to shell out the cash for the first goats of your herd. Here are the three ways you could go.

Firstly, you can purchase a doeling, as young as eight weeks old. The pro here is that often times breeders will be willing to sell you a package of baby goats at a discounted rate in the spring. However, these little ladies will need over a year before they can be bred, and then factor in about another five months until they can produce milk of their own.

Your second option is to buy a doeling who is a bit older (six months to one year). At this point in their life, these goats are known as junior does. Buying a doe at this stage will speed things up a bit. However, keep in mind that junior does will cost more than doelings.

And thirdly, you can skip the teenage years entirely and purchase a fully-grown doe who is already producing milk. This may sound like the easiest route, but it’s also an easy way to end up with a doe who no one else wants- and for good reason. If you want to buy a senior doe, make sure that she isn’t being sold because she’s not producing milk properly, has an infection, or is super skittish.

How Much Do Milking Goats Cost?

The variety in cost is due to milking quality, age, background, and what color they are. Goats with blue eyes are usually more expensive!

As for the cost of keeping a goat on your farm, here’s the breakdown:

As you can see, goats are fairly inexpensive to raise. And when you factor in the money you can make from selling their offspring and milk, you’ll realize that they certainly pay for themselves- and then some!

How Much Milk Does a Goat Produce?

On average, a goat produces up to fifteen gallons of milk in a month. How much milk they produce is affected by their age, management, size, nutrition, and even the season.

How to Milk Goats

In order to comfortably milk a goat, you will first need a milking stanchion. This is the contraption that holds the goat in place while you do your thing. Once you have a stanchion, you’re ready to begin milking!

Step One: Get Some Food

Your doe will surely want something to munch on while you milk her. Grab her some food and put it in a bucket.

Well, don’t actually grab her. Use the bucket of food to lure her (which shouldn’t take much effort) out of her pen and onto the stanchion.

Secure her head in the stanchion and place the food where she can comfortably reach it.

Step Four: Clean Her Up

Using some safe-for-goats cleansing wipes, clean her udder and teats. This will remove any dirt or bacteria and prevent it from getting in your milk.

Step Five: Discard the First Round

Use an old bucket to catch the first squirt of milk from each of your goat’s teats. This will clear them of bacteria and reduce the odds of any ending up in your milk.

You’re now ready to receive the usable milk. Get your milking bucket ready, and relieve that doe of her heavy udder!

As you can see, raising and milking goats isn’t difficult, but it does require lots of previous research and knowledge. And although it doesn’t take a ton of money, it does take a lot of time and love to raise dairy goats.

But once you have your little herd, you will be able to reap the benefits of their milk, their offspring, and their adorable personalities. Enjoy!

Want more great articles like this one? Check out our Consumer Resources or our Business Resources page.